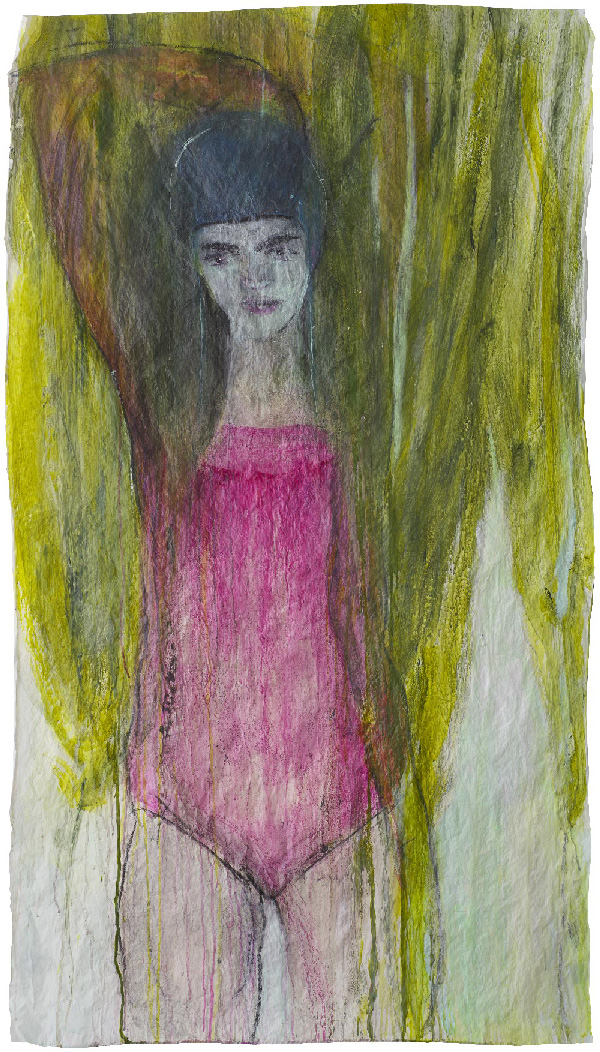 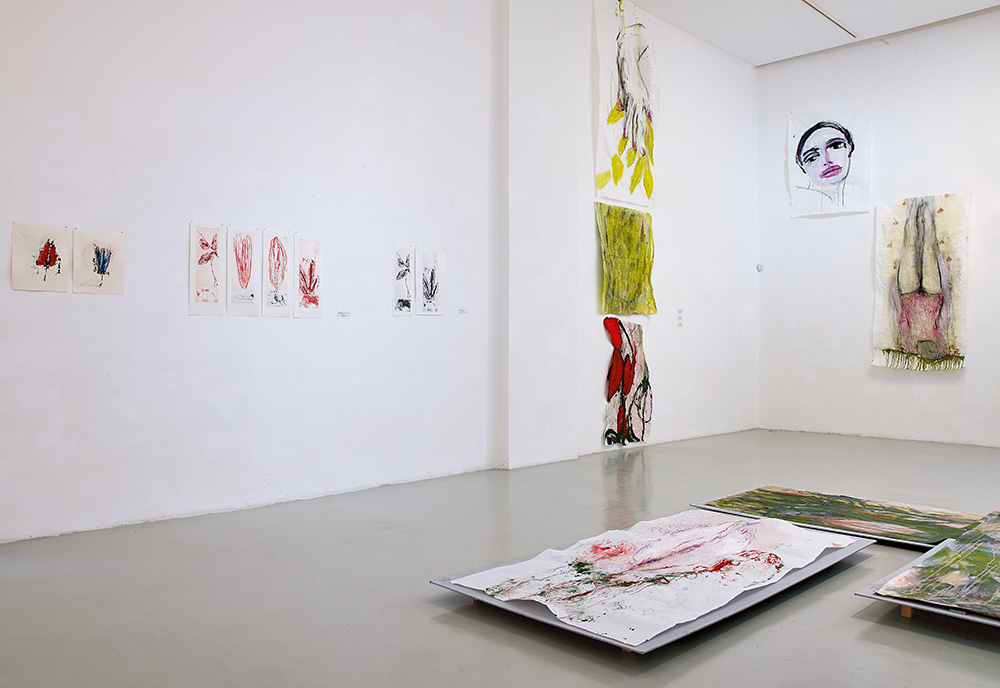 In‭ ‬Signs of Anxiety‭, ‬a greenish brush stroke gropes for the contour of the female body gradually being revealed as the brush continues its search‭. ‬The title infuses the black drawing of the flower with a different meaning‭. ‬All of a sudden it resembles the zigzag line of an ECG following a life-threatening heart attack‭. ‬Anxiety makes the figure fluid‭; ‬as it increases‭, ‬the mass evaporates‭. ‬The figure becomes transparent‭, ‬dissolving into an anxious entity‭.‬

It’s All a Pose‭: ‬A pose is an assumed position‭, ‬a body posture‭, ‬a stance‭. ‬A pose can also indicate pretense or a show intended to make a false‭ ‬impression‭. ‬The female figure in a pink leotard stands upside down on her shoulders‭, ‬her legs high up‭, ‬held by the supportive hands which seem to dissolve in the air‭. ‬Petals of pink flowers drop all around her‭, ‬plunging downward‭, ‬in stark contrast to the stretched legs‭. ‬The weight of the entire scene rests on the head‭, ‬in the absence of the shoulders that have turned into a melted‭ ‬green overtone which no longer offer a support or aid‭. ‬The‭ ‬“pose”‭ ‬is perhaps the lack of support‭, ‬the missing sense of security‭, ‬the shattering of the illusion that everything is going to be all right‭.‬

To read this text in Hebrew > 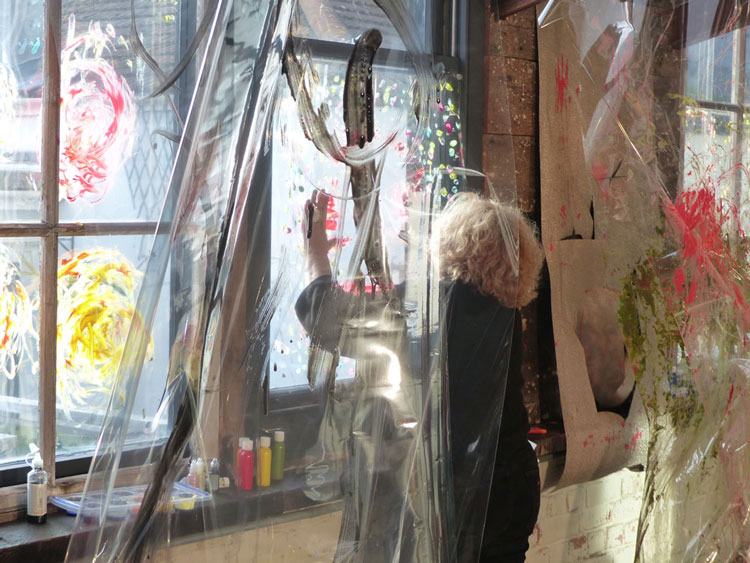 The performance talks about trying to fix different children.

Contrary to expectations of a perfect child

Constantly we are trying to fix him.

Using transparent paper to sharpen an illusion that we can fix. As we all are transparent and vulnerable. 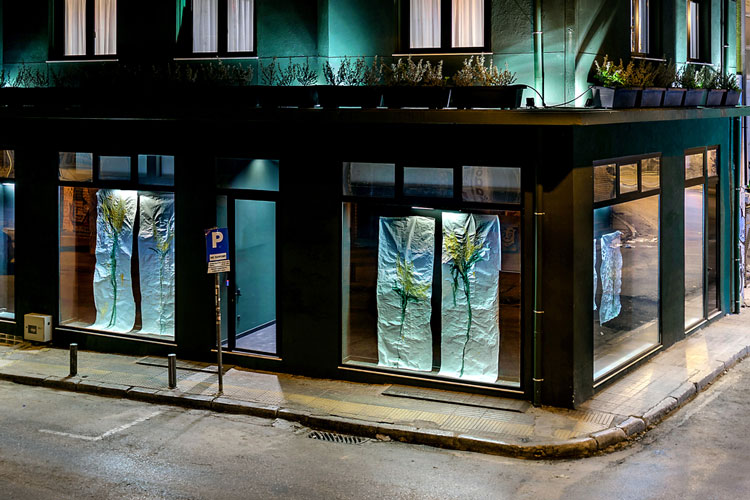 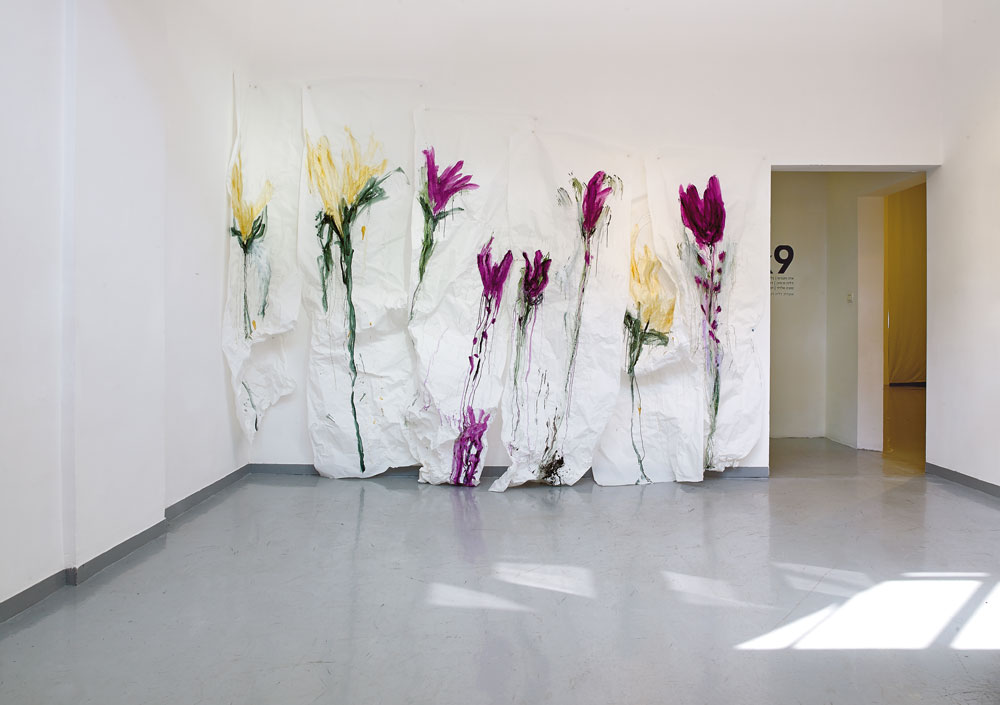 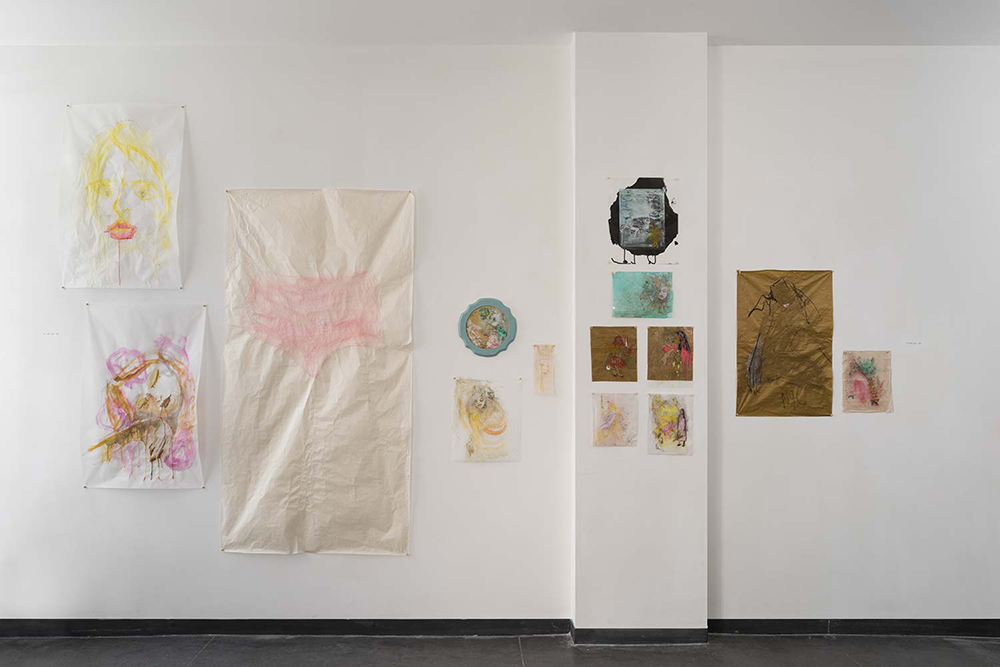 The project was initiated by Cohen Prah-ya, who wanted to create a physical and mental space of collaboration and dialogue between women-artists. The exhibition spans works created by each of the artists during her stay in the “Room Studio”, as well as works by other women-artists whom they hosted on site. Cohen Prah-ya’s featured works were also created when she was a guest herself, during a residency at the School of Visual Arts in New York. 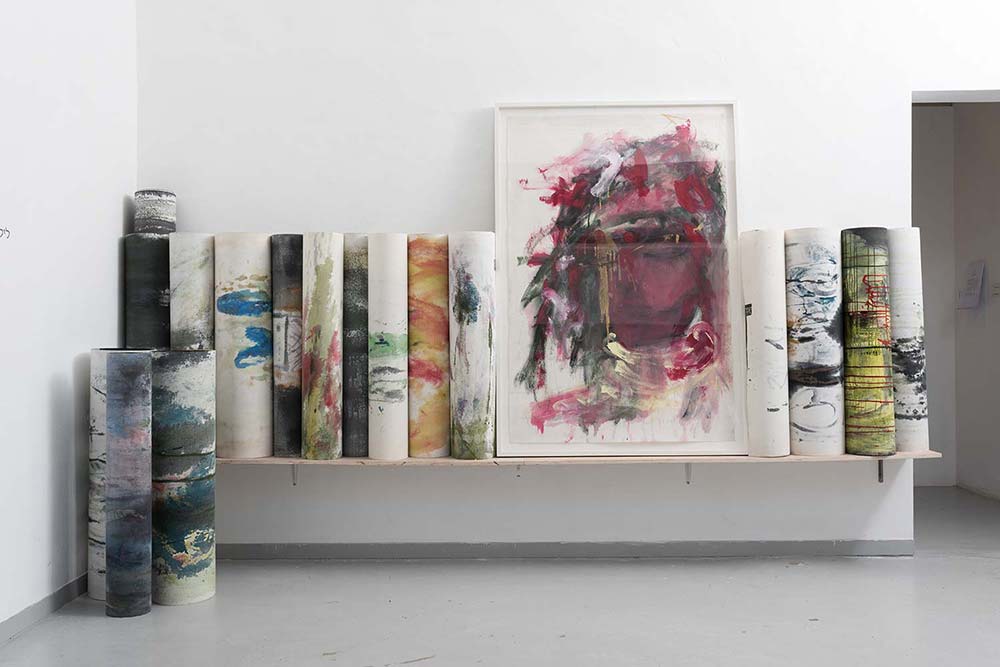 Lili Cohen Prah-Ya’s cluster of works “Two-Sided” relates to the unusual material on which the works were rendered, as well as their contents. The works were painted on a unique “paper-fabric” originally intended to be used for shoe-soles. Work on this substance yielded paintings which may be viewed on either side of the surface, hence “two-sided.” This body of work oscillates between the abstract and the figurative. It introduces a large-scale female portrait, a figure that likewise verges on the abstract, eliciting questions about its fluid identity. 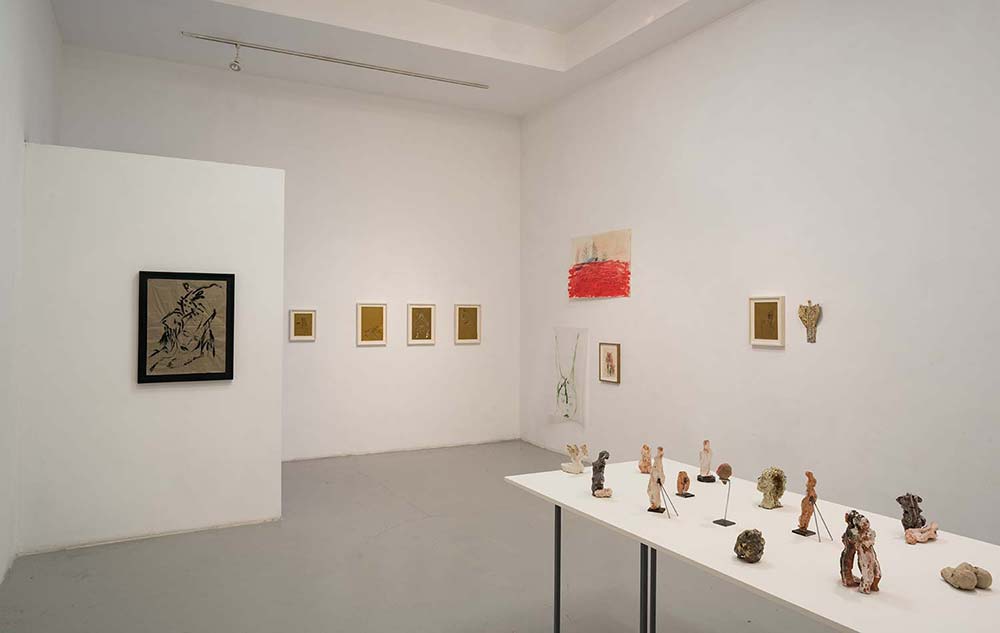 A woman needs “a room of her own”—a real and a metaphorical space, safe and nurturing, where she may shatter every binding taboo or myth, and neutralize the echoes, dictates, and expectations from the outside. Lili Cohen Prah-ya’s works may be construed not only as works created in “a room of her own,” but also as ones that function—in their amusing, wild language, which challenges familiar orders—as little rooms of her own.

Painting is the major medium identified with Cohen Prah-ya’s practice. It extends over diverse surfaces (canvas, paper, plywood, cardboard, etc.) and materials (acrylic, oil, spray paint, markers, pencils, watercolor, etc.). Of this broad and diversified painterly spectrum, the exhibition “Blondes Cry Too” formulates a fine, refined combination of drawings-paintings on paper and small ceramic objects, all of them created in the past two years, except for three prints created in the 1980s, at the outset of her artistic career.

Recognizing the limits of the material—whether paper or clay—and the way it dictates a quick and expressive work process, gave rise to a drawing language that reveals a different aspect, less immediate and familiar, in Cohen Prah-ya’s oeuvre at large. The encounter between the small sketchbooks and raw ceramic figurines, between delicate drawings on golden paper and diluted paintings on parchment paper, or between saturated paintings and drypoint prints, unearths an intimate language, somewhat childlike. Cohen Prah-ya’s works familiarize the foreign (the subconscious, the unsaid thoughts), bringing to light the latent strata of the realm of fantasy.

The title of the exhibition, “Blondes Cry Too,” meshes a hackneyed cliché and sarcastic pungency together, like an instinctual counter-response to chauvinistic sayings such as “beautiful and dumb” or “look pretty and keep your mouth shut.” The subtext embedded in the title turns on the “automatic viewer,” conjuring up two simultaneous visual images: a woman’s portrait featured in the exhibition, bearing her name, and an image of the “other blonde,” a figment of the viewer’s imagination. In the gap between the real and the imaginary, Cohen Prah-ya encapsulates a subjective experience of “deconstructed” femininity comprised of a set of differences and antitheses to beauty myths and social-cultural stereotypes. She strives to remove the metaphoric barrier between what appear to be antithetical worlds, and fuse them into one another to form a single new entity.

Cohen Prah-ya’s work explores the language of painting-drawing, harnessing it into sculptural materiality. The reduction and laconicism of this language, as well as the adherence to the primal material, lay the objects bare, making it possible to observe them in their raw, pre-rational state. The raw quality and ostensible “artlessness” of the ceramic objects turn out to be powerful. The aesthetic value embodied in the material awkwardness corresponds with the direct “inarticulate” drawn line concealed in the small sketchbooks. The internal dialogue between the verbal and the visual, between object and metaphor, between the two-dimensional and the three-dimensional, sheds light on little, human moments that have been frozen. The conceptual and aesthetic syntax developing between the paper works and the ceramic objects accentuates the ostensibly antithetical qualities embedded in the works: frugal drawing versus vivid coloration, transparency versus opaqueness, traces of the artist’s touch on the material versus traces of inner voices which make their way into the drawing-painting. These contrasts spawn a broad range of feelings and states of mind: love, fantasy, pain, and beauty alongside embarrassment, silence, weakness, and self-irony.

Thus, in the transition from paper to clay, the intricate dissonance between the repressed-trapped and the overt-lucid is gradually exposed. Cohen Prah-ya stretches the line between that which is “proper” and may be revealed and that which should be kept hidden and silenced, airing the shame in the open.

The text concealed in the drawing-painting is a blend of internal dialogue, jokes, and associations elicited by widespread expressions: “blondes cry too,” “unsociable on the bus,” “mom doesn’t hug,” “organized tour,” “constantly having to save you.”

The conspicuous presence of the written word in Cohen Prah-ya’s works becomes a funnel of the subconscious, of the inner voice. The shut eyes, as in sleep, represent being indrawn and introspective, as the words go on, insisting on “bombarding” the silence. Language covers up the shame, but at the same time also exposes it, offering a possibility of resounding hearing or reading, the same old expression whose sounds (may also be) different. 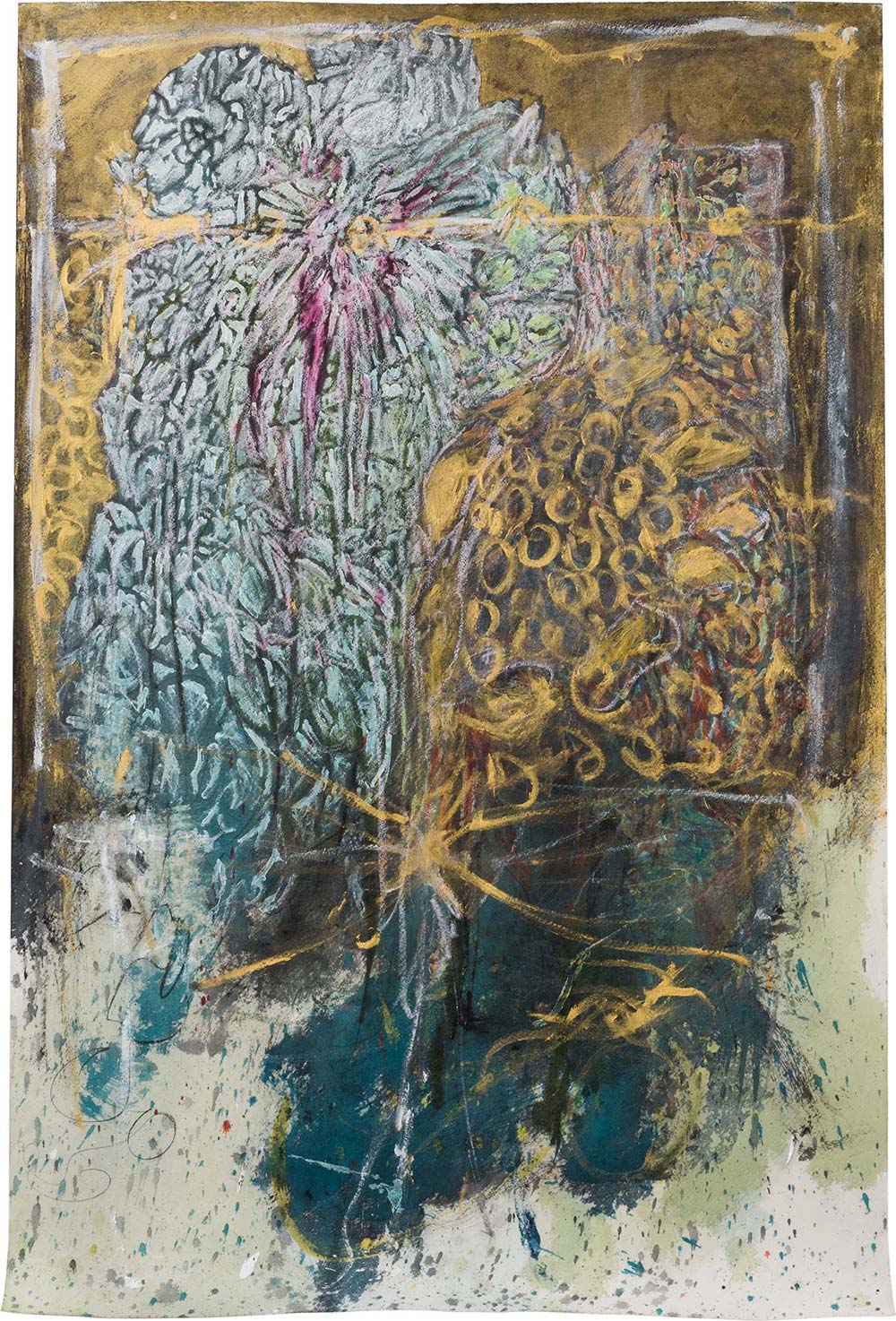